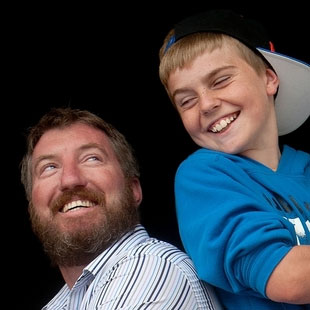 They've only just been matched but Lisa Beamsley reckons Wade Meads is the perfect big brother to her son.

Mr Meads is one of three mentors to have been matched in the Rotorua Big Brother Big Sisters programme. He and Ms Beamsley's son Luke Donnelly, 10, met for the first time last week and they have already made plans to go mountain biking.

Luke's father was Mike Donnelly, Lisa's partner of more than 30 years. He died from a brain haemorrhage when Luke was 7.

"As a mum you want to do everything," Ms Beamsley said. "I've tried to fill the gaps but in reality it's not possible. We talked about this first and Luke was very keen to suss it out further."

She said she assumed Big Brothers Big Sisters was for troubled kids, but after reading more about the programme she thought it would be a great help to Luke.

"You want to be able to make everything okay and take away the pain. My heart is hurting too but I need to make sure he is okay. He's a beautiful boy and I want him to be happy. Wade isn't there to fill his dad's shoes but he is a mate to him."

Mr Meads is a dad to two daughters, aged 3 and 7. It was his wife who said he should become a mentor. "Maybe she thought I've got too much time on my hands," he said. "We read they were struggling for men and I could spend the time doing it. We all get something out of it. Luke is a good kid, he's into everything I'm into."

Each year more than 280,000 children around the world are helped to reach their potential through professionally supported one-to-one relationships.

Rotorua co-ordinator Darryl Parker said it was exciting to now be matching mentors to children, six months after the programme launched in the city. "It's awesome to get the match," he said. "You get to know the family and the child, so by the time you pair them up with their mentor you feel confident there will be a good match."

For more information, email darryl.parker@bigbrothersbigsisters.org.nz. He is based at the Rotorua police station.